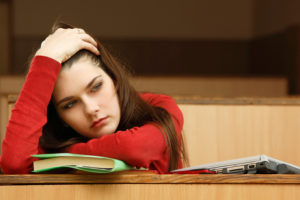 Depression, especially in teens, has been described as the “invisible illness” because the symptoms are so often confused with the typical moodiness of puberty and teenage adjustment.

In reality major depressive disorder is the most common illness among teens, and unfortunately 70% never see a professional or receive help.  Untreated depression is highly correlated with suicide deaths in both adolescents and adults.  In Utah suicide is the leading cause of death in youth aged 10-17 and it has tripled since 2007 (Salt Lake Tribune July 2016).

Warning signs in teens differ from normal teenage behavior by how long they last, how intense they are, and the degree of problems they are causing.  Parents should look for behaviors that are completely out of proportion to an event or situation, and signs of depression that last longer than several weeks.

Major signs of depression to watch for include:

If parents see these signs, their teen should immediately have an assessment with a mental health professional.  Prescribing anti-depressants without an in-depth evaluation should not be the first option.  Medications treat symptoms of depression rather than causes.

Cognitive-Behavioral Therapy (CBT) has been the most widely researched psychotherapy approach to treating depression in adolescents with very positive outcomes.  The National Center for Biotechnology Information recommends CBT to treat depressed teens with the addition of anti-depressant medications if needed.

Cognitive Behavioral treatment is a psychotherapy based on the fact that the way individuals perceive a situation is more closely connected to their reaction than the situation itself.  This therapy helps teens change unhelpful thinking and behavior patterns.  Families should be included in learning about CBT.

There is no excuse for depression to remain invisible or untreated today. The most important thing that parents and schools can do to combat depression is to de-stigmatize the illness and make it easier to identify. Teens need to be encouraged to talk openly about what they are going through with parents and supportive adults.