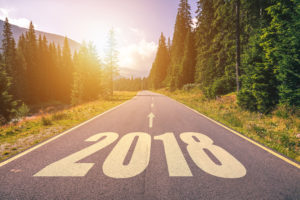 As 2018 begins many of us are turning our attention to ways we can improve our lives.

Research shows that over 65% of Americans will make New Years Resolutions.  According to the Journal of Clinical Psychology the top resolutions Americans will make are 1) losing weight; 2) increasing exercise, 3) stopping smoking, and 4) better money management and debt reduction.

Why is there so much dissent and disagreement around New Year’s resolutions? Because, based on popular belief, they fail to deliver!  Among the people who set New Year’s resolutions, less than 10% percent actually achieve them. More than 50 percent of people who make resolutions can’t even remember what they were when you ask them later in the year. What happens in January stays in January. It rarely makes it to June!

Then why do we feel such a compelling urge to start over again with new resolutions each year?  The process of setting goals for positive change immediately increases our motivation, and thinking about being actively engaged in the pursuit of our goals activates the brain’s pleasure centers, giving us a jolt of happiness regardless of the outcome.  We seem to be deriving as much pleasure from chasing our dreams as we do from achieving them.

People often make unrealistic resolutions in an effort to reinvent themselves, but they aren’t really ready to change their habits, particularly bad habits, and that accounts for the high failure rate. This is called the “false hope syndrome” and can be quite damaging to a person’s self-worth when they fall short of making changes year after year.

Another aspect of failed resolutions is believing that you can change habitual behaviors by just “trying not to do it”.  Habitual behavior is caused by thinking patterns in the brain that create neural pathways and memories, which over time become hard wired.  These neural patterns unconsciously become the default for behavior when the person is faced with a choice.  For example, if you are trying not to eat sweets, you may find yourself halfway through that piece of chocolate cake before you realize you have broken your resolution.  This is the reason addictive behaviors are so difficult to change.  To actually change behaviors requires creating new neural pathways and forming new thinking patterns.

Although psychology is somewhat negative about New Year’s Resolutions there is a flip side of this coin.  It is always a very good idea to stop and analyze your life in a mindful way and make commitments to do things differently.  This is a key factor in the practice of mindfulness training which encourages being fully conscious of thoughts and actions in order to change maladaptive behaviors.  So if you feel strongly compelled to make New Year’s resolutions here are some tips to help you make them work:

1. Focus on one resolution, rather several and set realistic, specific goals. Losing weight is not a specific goal. Losing 10 pounds in 90 days would be.

2. Don’t just make the resolution about the New Year – make it a year long process, focusing on the changes you need to make every day.

3. Write down your resolution and post it where you can see it. A goal that you can actually see is massively more powerful than a goal in your head.

4. Take small steps. Many people quit because the goal is too big requiring too much effort and action all at once. Break it apart into smaller steps.

5. Have an accountability person, someone close to you that you can check in with.

6. Celebrate your success between milestones. Don’t wait for the goal to be finally completed.

7. Focus your thinking on new behaviors and thought patterns. You have to create new neural pathways in your brain to change habits.

8. Focus on the present. What’s the one thing you can do today, right now, towards your goal?

9. Be mindful. Become physically, emotionally and mentally aware of your inner state as each external event happens, moment-by-moment, rather than living in the past or future.

10. And finally, don’t take yourself so seriously. Have fun and laugh at yourself when you slip – because slipping is normal – but don’t let the slip hold you back from working at your goal. Don’t give up!